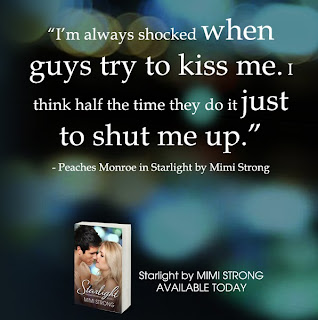 I'm so pleased to be part of the book tour for Starlight, the second in Mimi Strong's Peaches Monroe series.

As y'all know, because you read my review of Stardust yesterday, I'm rather fond of Ms. Peaches Monroe. ;) She's just an average, chubby girl, who's suddenly thrust into a completely different life. One she's not sure she's comfortable in since she's not the fun girl. It sure is fun watching her figure it all out! 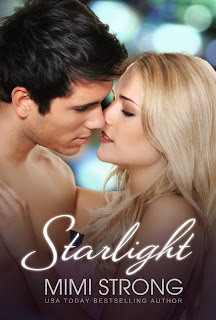 Starlight by Mimi Strong
Peaches Monroe #2
Release Date: September 5, 2013
Source: I received an eARC from the author in exchange for an honest review

Synopsis
So, I fly off to LA for the big Peaches Monroe (that's me) underwear campaign shoot.I'm nursing a bruised heart from everybody's favorite TV vampire, Dalton Deangelo, when along comes this new batch of trouble. Keith Raven. Sexy, tanned, and nearly naked. He's my new co-model, and let me tell you, Keith is the full package. Other girls fantasize over his sexy calendars for a reason. The best/worst part is he takes his time when he touches me, which drives me absolutely crazy.My new bestie Mitchell warns me that all male models are walking disasters, but I can't control myself around Keith.To mess with my head, Dalton Deangelo is trying to redeem himself and win me back. He sucks at redemption, but he has a special sense for danger, and always shows up when I need to be rescued. Now I've got two insanely hot guys fighting over me, and I'm headed for disaster.Somebody please stop me, because if I keep slamming my heart like this, it's going to break.

I really, really liked Stardust but I gotta tell you, Starlight was even better!! Oh, it was another bawdy romp, but Starlight packed more of an emotional punch for me. There were times I teared up, but this is Peaches Monroe we're talking about - so there were many more times when I was guffawing aloud.

Starlight sees Peaches in L.A. where she's gone to launch her new underwear line. She's meant to be staying at Dalton's until he arrives but she, instead, makes a discovery that has her rethinking their affair. While doing her photo shoot, she meets Keith Raven. Keith is an underwear model and he's gorgeous, like Dalton. But he's so many things Dalton is not and he may just be the guy to help mend her broken heart. That Peaches becomes comfortable enough with Keith to share her secrets says a lot about him. He really seems to get Peaches.

Of course, Dalton arrives back in town and makes waves as he's prone to doing where Peaches is concerned. How does a 'normal girl' go about choosing between two hunky men?!?

Starlight also introduces us to Mitchell. Oh how I adore Mitchell! He's an assistant on the photo shoot and basically assumes the role of Shayla (Peaches' BFF back home) while Peaches is in L.A. He's a rock solid best friend, coming to Peaches' rescue quite often - when he's not getting her into trouble, that is. ;) He adds so much charm to the story. And in a story starring Peaches, that's saying something!

We get a deeper look into Peaches' personality in Starlight. I think it was eclipsed some by Dalton's in Stardust, but here we see her in vivid detail. Every potty-mouthed, intimacy avoiding, girl-getting-more-comfortable-in-her-own-skin moment was exhilarating. I felt I got to know Peaches on a completely different level. And she's such a delight! Oh, and I have to say that Peaches is quite sexually adventurous for a girl who claims she's not the fun one.

Y'all know I wasn't exactly a fan of Dalton but I did find myself sympathizing with him the tiniest bit. BUT I am a HUGE fan of Keith Raven. Keith endeared himself to me with his treatment of Peaches. He's an underwear model, yes, but he's much more real - an 'earth muffin' as Peaches calls him. And I adored every moment he and Peaches spent together. I don't know what the future holds for Peaches but I hope it includes more of Keith. I do know her story with Dalton isn't finished.

Starlight allows a more intimate connection with Peaches. I already identified with her, but now I understand her much better. I felt like Peaches experienced some real emotional growth. That combined with her classic snarkiness, her shoot first-ask questions later attitude, and all those super-smexy moments with Keith, equate to lots uproarious fun! :)


"I don't think of myself as being a very fun or outgoing person, but my mouth thinks it's fun." -Peaches, Loc 70

"You're an underwear model and I'm a girl who packs chocolate in her purse at all times. This, right here, is the full fantasy." - Peaches, Loc 649

"Either I was getting better at staying cool around incredibly hot guys, or there was something different - better - about Keith, compared to he-whose-name-shall-not-be-invoked." -Peaches, Loc 653

"You're the whole package," he said. "You're real, and you have more class than most girls, even if you do swear like a truck driver sometimes." - Keith, Loc 2020 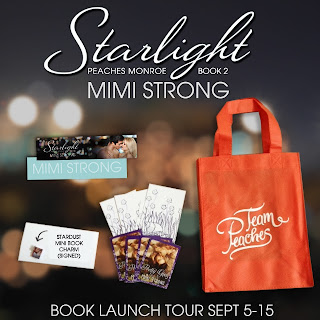 Mimi Strong writes chick-lit, erotic romance, sex comedy, and new adult contemporary romance. Most of her characters have a strong sense of humor.Here's what she has to say:I've always had a lot of sides. Sometimes I'm vulnerable, and sometimes I go after what I want without a single doubt.My favorite person is my husband. If I can crack him up and see his eyes crinkle at the corners, my day is made. In fact, I love making everyone around me laugh.I've always enjoyed empowering stories about kick-butt women who don't hold back and the awesome men who are smart enough to love them. Now that I'm writing these stories, I couldn't be happier. I hope you enjoy them too!