Welcome to my stop on the blog tour for Jenny's Blue Velvet by Angela Carlie. My stop includes all the details for the book, my review and a giveaway.

One lucky commenter will win an ebook copy of Jenny's Blue Velvet. To enter, simply leave a comment on this post. This giveaway is open internationally and ends on September 16th. The winner will be chosen randomly.

This tour is presented by Xpresso Book Tours. 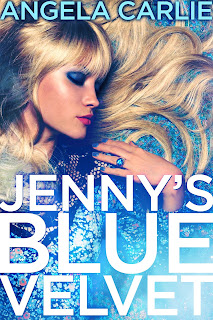 Jenny decides her next big step is to become a romance writer. Romance books are flying off the virtual shelves, after all. This will be her big break, her escape from the prison, and a way to freedom. Self-publishing is all the rage these days. She’ll be a best seller in no time.

When Jenny makes friends with a woman named Cassandra from the gym, she instantly decides that her new friend will make a perfect main character in her upcoming book. After the first chapter, real life begins to resemble the fiction she’s writing. Her friendship blossoms, sex with her husband turns into a daily feast, and her job gets more interesting with each chapter written.

Out of the blue, a person who is a close friend with her husband and who is dating Cassandra disappears. As the mystery behind the missing person unfolds, Jenny wonders if she might be responsible for his possible death. And if she is, what will be the consequence? What has this writing business gotten her into?

Jenny's Blue Velvet is a dark, humorous, romantic thriller for adults only.

This is a difficult review for me to write, and not because I didn't like the book. I think this may be one of the strangest books I've ever read. And that's not necessarily a bad thing. Jenny's Blue Velvet really messed with my head! In fact, I can't say a whole lot without spoiling the experience. I will say it was not what I expected.

Jenny seems to be experiencing a mid-life crisis of sorts. She spent eight years in college but didn't receive a degree. She's been married for 18 years, has two kids and works at a dead-end job. However, she's decided to write a romance novel since they seem to be so popular. Maybe if she can make enough money on the book, she can quit her job.

Jenny was a difficult character for me to like. She spends most of her time complaining about her life. But other than writing her book, she isn't doing too much to change things. Jenny's husband, Jason, seems a solid guy. He owns a gym and takes an active role in Jenny's health. In fact, we first meet the couple as they're running a 5K. Jason seemingly ensures they eat healthily and he's intent on Jenny taking a daily vitamin. Jenny is beginning to have concerns over Jason's fidelity when she sees him with another woman. However, Cassandra introduces herself to Jenny and lets her know she's dating another man. Jenny and Cassandra form a tentative friendship. Jenny thinks Cassandra is a very interesting woman and decides to use her as the basis for the heroine in her novel.

Jenny's novel, which we get chapters of as she writes, is intriguing. It's a romance with a paranormal twist. We don't get much development since we don't actually read it in its entirety, but it was definitely more exciting than Jenny's day-to-day life. Candy and Damian, the characters of the novel, were interesting and I'd have liked to have gotten to know them better. Candy, in particular, with her fascination with the color blue.

Jenny's Blue Velvet has a 'Stranger than Fiction' feel to it. It is quite a trippy reading experience. I enjoyed the romance novel portion because I enjoyed Candy and her story, even if it was odd. However, even though I did like the mystery surrounding Jenny's life, I never really connected with Jenny as a character. Of course, there is a reason for that but I can't explain it without spoiling. Jenny's Blue Velvet is unique and it's well written, too. I simply think it's rather strange. And though that's not a bad thing in itself, I think maybe it's a little too strange for me. 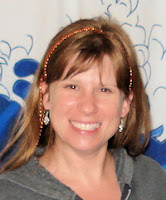 I’ve lived in the state of Washington my entire life. Sure, it rains a lot, but that’s what makes it so beautiful here. I’d like to say it’s the most beautiful place on the planet, but I have yet to travel the world. Someday I’ll know for sure.

I write fiction involving young people. Mainstream publishing would label my writing as YA or middle grade. Since I’m an indie author, I can skip over the labels and tell you that each one of my stories is unique, can be read and enjoyed by all ages, and almost always has a young person as the protagonist. Authors write what they know and I don’t know old yet. I may someday write about older people, but that’s so far in the future that I can’t see it yet.