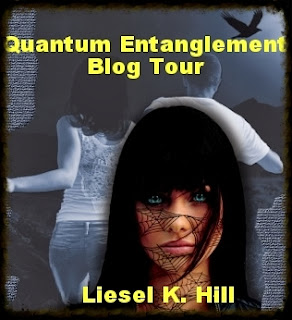 Welcome to my stop on the blog tour for Liesel K. Hill's Quantum Entanglement. This is the second book in the Interchron series. If you missed my review of book one, Persistence of Vision, you can read it here. Today, I have all the important details about the book, a list of the top ten memories for Maggie and Marcus, and a giveaway.

Quantum Entanglement is a book I've been waiting to read. I hope to read it soon!

And, during the blog tour, Quantum Entanglement is available for only 99 cents!! 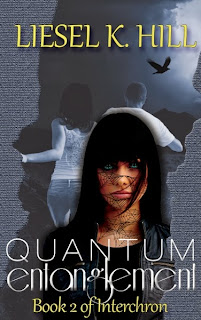 Synopsis
Five months after traveling to a post-apocalyptic future where collectives reign supreme and individuals have been hunted to the verge of extinction, Maggie Harper was returned to her own time until the threat to her life could be neutralized. She thought Marcus and the others would return for her within a few weeks, and now she’s beginning to worry. When travelers from the future finally show up to collect her, it’s not who she expected. With the return of her memories, she wants more than ever to see Marcus again, but a snake-like woman whose abilities are a perfect match for Maggie’s, an injured Traveler, and decades of civil unrest to wade through all stand in the way of their reunion.Meanwhile, Marcus and Karl traipse through the countryside, trying to neutralize Colin, who’s promised to brutalize and murder Maggie if he can get his hands on her. When a collective woman is left for dead, Marcus heals her, hoping she’ll be the key to killing Colin and bringing Maggie back. But she may prove as much a hindrance as a help.The team struggles to get their bearings, but things happen faster than they know. The collectives are coalescing, power is shifting, and the one called B is putting sinister plans into action. If the team can’t reunite and get a handle on the situation, their freedom and individuality—perhaps their very identity—will be ripped away before they can catch their breath.

Hello Bookworms! I’m back. I was here just over a week ago for the Dark Remnants blog tour. Now I’m here to promote Quantum Entanglement, book 2 of Interchron, my dystopian series. Whew! What a busy couple of weeks!

I’m so happy to be here, though. Interchron is my first published series, and I dearly love the characters and the story. Brandee has asked me to do a Top Ten list, such as Maggie and Marcus’s top favorite memories together. For those who haven’t read book 1, Persistence of Vision, yet, just know this is significant because Maggie has some serious issues with her memories.

In truth, it’s hard to come up with favorite memories, because that implies that they’re happy ones. Not that the characters don’t have happy memories, but because of Maggie’s memory issues, we haven’t seen many of them yet. So, I’ve modified the list to include their top ten significant memories. So, here goes.

10. For Marcus, the days surrounding the time that David decided to become a collectivist. Book 2 will explain the reasons behind this. Remembering what happened back then will end up being key to Interchron’s central mission, which is to bring down the collectives.

9. For Maggie, time spent with Jonah at his friend’s mountain cabin. This is mentioned in Quantum Entanglement and it may seem a bit random. I’m sure I’ll have some readers that will be like, “what the…” but don’t worry. Her emotions about this place are very significant and will come into play in the next installment.

8. For Maggie, B cornering her in a glass room. This has been one of her flashes since the beginning. It’s one of the most significant memories she has. We see more of it in Quantum Entanglement, though it won’t be fully explained until near the end of the series.

7. For Maggie, Clay on his knees, mouth open in a silent scream. On par with #8, Maggie has a flash of this, but can’t remember what it pertains to. It will become VERY significant as we further explore her memories.

6. For Marcus, aside from just what happened between himself and his brother when they were young men, there’s a specific part where they meet three collectivists on the bank of a river. That memory will also be significant as it will give them information that will also help them in Interchron’s central mission. (Again, you’ll understand this once you read book 2).

5. For Maggie, a rock formation, with people standing atop it. She doesn’t see the latter detail until Quantum Entanglement, but this will end up helping her save many when the memory comes fully to fruition.

4. For Maggie, Joan holding a baby, crying. The significance of this memory won’t be unveiled until nearly the end of the series. But trust me, it’s big.

3. For both Maggie and Marcus, memories of spending time with the entire team, especially back when it included both Clay and his wife. Nothing specific, just typical fond memories we all have of good times spent with family and close friends.

2. Maggie and Marcus’s first kiss. We haven’t actually seen this yet, because Maggie sort of forgot about it, but perhaps a flashback in a future volume…? Just sayin’.

1. Spending a romantic evening together in the diamond mines beneath Interchron. Maggie has recovered parts of this memory already, and it’s significant that Marcus gave her a bracelet that correlates with the memory. As the series goes on, we’ll learn the higher significance of this time for the two of them.

Well, there you have it! Maggie and Marcus’s top ten memories. Sorry to be so mysterious, but memory is one of the major aspects of this series, and I don’t want to give any spoilers. I guess (shameless plug coming!) to learn more, you’ll just have to read the books. Hehe.

Books are a great way to make memories, and as the Remembrancer said, “Memories are intensely personal things…like rivers of identity that seep into the pores of your soul.” (Persistence of Vision, 275)


Happy memory-making everyone! I hope Interchron sparks some great ones!

See the giveaway details
at Goodreads.