It's so nice having kids who love reading as much as I do - especially come summertime when I can put them to work writing reviews! ;) Y'all get a little variety here and I can take a little breather. Enjoy Jax's review! 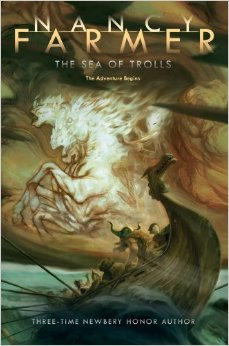 Synopsis
Jack was 11 when berserkers loomed out of the fog and nabbed him. Now in 793 AD, Jack and his little sister Lucy are enslaved by Olaf One-Brown, and his fierce young shipmate Thorgil. Alongside the crow "Bold Heart", they learn to "Just say no to pillaging."

In one of their ill-fated attempts to make school reading likable, we were told to read a choice book that must be “at our level” and at least 200 pages. I decided, since I had just read and enjoyed The Lord of Opium, I should read the Sea of Trolls series by Nancy Farmer.
When I started reading the first book, The Sea of Trolls, the characters seemed to fit the archetypes marked out by the Hero’s Journey, which we were learning about. There was the hero, Jack, the mothering figure, his mother, Lucy, the damsel in distress, and the Bard, the one who trains him in magic and prompts him to go on the quest. This prompted a distrust of the book, as I usually find books with well established character stereotypes annoying. However, once I got a little further into it, I changed my mind.
What starts the adventure is the Northmen, basically Vikings, kidnapping Jack and Lucy for slavery. I assumed that they would be at least the henchmen for whoever the villain was, but, as it turns out, all of the Northmen turned out to be helping Jack, although not on purpose. Jack reveals his talent for magic, and voila, the Northmen keep him and take him to their village. Along the way, a shield maiden named Thorgil makes it clear that she despises Jack and Lucy, for what reason it is not given. In the village, Jack is passed into slavery, and is forced to use his Bard powers to sing for the half-troll queen of the land, Frith. He messes up in the praise-song, and Frith’s beauty is gone. Enraged, she sends him on a quest with Thorgil and Olaf-One Brow, one of the Northmen. And if they don’t complete the quest, Lucy will be sacrificed...
This was one of the books where you put it down after you’re done and you sit there, dazed, wondering if you should get up from your comfy spot on the couch or just curl up and go to sleep and have troubled dreams about dragons and trolls. It probably will make you sit quietly for a while and think.
There are two other books, The Land of the Silver Apples, where the nature of monks is put into question and they journey to the land where time never flows, and The Islands of the Blessed, where a restless spirit threatens to slaughter entire villages, and Jack must both fulfill a promise and repay a debt.