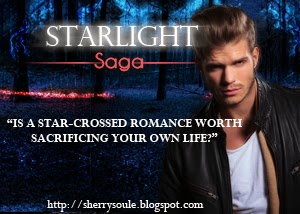 I'm thrilled to share with you about Sherry Soule's Lost in Starlight, the first book in her Starlight Saga. I'm really looking forward to reading Lost in Starlight. :) Today, I have some of Sherry's favorite moments from the book. 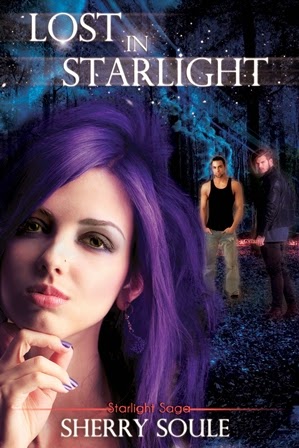 Synopsis
High school reporter Sloane Masterson knows she has one helluva story when she witnesses hottie Hayden Lancaster bending forks with his mind.

Like any good journalist, Sloane sets out to uncover the truth, even if it includes a little stalking. When the superhuman feats start to pile up and the undeniable heat rises between them, Hayden has no choice but to reveal his secret: he’s an alien hybrid.

They’re as different as night and day—she’s a curvy, purple-haired, horror junkie and he’s a smoking hot, antisocial, brainiac—yet the intense fascination between them refuses to go away. Even at Hayden’s insistence that dating each other is “off limits” and crazy dangerous, their fiery attraction threatens to go supernova.

Now Sloane’s dealing with creepy government agents, über snobby
extraterrestrials, and a psycho alien ex-girlfriend out for revenge. After a crash course on the rules of interstellar dating, Sloane must decide if their star-crossed romance is worth risking her own life....

Sherry has compiled a few of her favorite moments from the first book in the Starlight Saga, “LOST IN STARLIGHT.” Enjoy the excerpts!

***Excerpt 1***
I’m suddenly aware that Hayden Lancaster’s blatantly staring at me. Hard to miss. His messenger bag is in one hand, and drumsticks stick out of his back pocket. I lift my hand in a hesitant little wave. He doesn’t return my gesture, just continues gazing at me through those thick lashes that frame his unique eyes. My head goes all woozy. Even my limbs feel jittery. Frustration and confusion are
warring inside me for having any feelings for someone like him.

And what’s with the stare?

A wave of nervousness hits hard. Is there toilet paper hanging out of my jeans? Food stuck in my teeth? Or have Frankenstein bolts suddenly sprouted from my neck?

Being on Hayden’s radar is a little unsettling. I admit there’s something about Mr. Puppy Hero’s rare smiles, lopsided with an edge, that draw girls to him like insects buzzing a bug zapper. For better or worse, no one can resist Hayden Lancaster. Not even me....

“I do now...but before I met you, I didn’t think there was any such thing as love-at-first-sight, or one person for everyone, or a soulmate. But when I’m near you, I think...I might be wrong.” His expression softens, and he runs his thumb across my bottom lip, causing the blood to sear in my veins. “You know what I believe now? That the universe has no conscious will, only inevitabilities, and it was inevitable that we should be together. It was fated—written in the stars—that no matter what, I’ll never stop trying to make you happy or wanting to keep you safe. I am lost in you, with no desire to escape.”

My breath snags in my throat. Even my knees wobble. How is it that he can say the most romantic things?

Award-winning author, Sherry Soule writes thrilling tales of romance and suspense, often mingled with a dash of the mystical and a splash of trendy fashion. Her published novels do not include any graphic sex, explicit violence, or excessive profanity, so that all of her novels can be read and enjoyed by both teens and adults. Sherry currently lives with her family and one very spoiled black cat in California's San Francisco Bay Area.

The awesome book cover was designed by the talented, Kristen Thompson-Oh of KCT Designs at www.kctdesigns.com

Eager to read the first five chapters on your Kindle? FREE every Friday from Amazon: http://amzn.to/1hdo6Oh
Posted by Bookworm Brandee at 2:30 AM