Welcome to my stop on the blog tour for S.A. Wolfe's Freedom. My stop includes all the important details for the book, my review, and a giveaway. 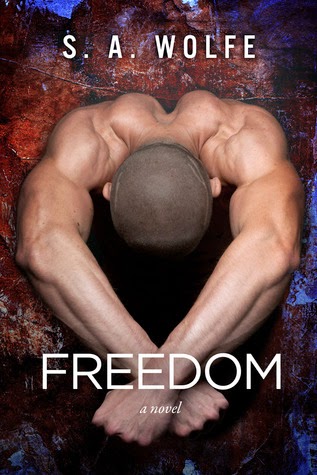 Synopsis
Dylan Blackard is back in town and certain everyone knows his secrets.

Putting away his notorious reputation as the wild guy with a womanizing past, he's now on a new path, wanting to be the good guy his brother can stop worrying over. As long as he gives up his old vices - including women - he can keep himself on the straight and narrow and finally live up to everyone's expectations.

However, obsessing about his lack of self-control is making Dylan on humorless, cranky hermit. That all changes, though, when his brother hires a new employee, the stunning Emma Keller, who will be sharing an office with him and all of his tightly wound nerves.

Emma, a spunky young woman from New Jersey, isn't about to feel sorry for Dylan and his situation. She is beyond distracting to him, and that is enough to turn his emotional balancing act upside down. Not only is she intelligent, and a smart aleck, she's also very determined to pull the sexy Dylan Blackard out of his self-imposed isolation.

From the moment he meets her, he feels alive again, but Emma doesn't come as a gift with a pretty bow; she comes with major baggage - a family embedded in its own tumultuous history.

Will Emma be the tipping point that causes Dylan to regress into his past destructive behaviors...or will he actually pursue her for keeps?

Freedom is the second book in the Fearsome series. While I liked Fearsome, I enjoyed Freedom more. Getting to know Dylan better was a joy. And Emma was a wonderful match for him. Freedom can be read as a standalone. However, I think having read Fearsome and having some backstory added to my enjoyment.

Dylan Blackard has a mental illness. Following a stint in a mental health facility, the boy who was once known as a party boy and lady-killer has a new regiment. Dylan now works, exercises and steers clear of alcohol and women. He also takes meds and visits is psychiatrist regularly. Things are going so well for this new anti-social Dylan until Emma Keller shows up.

Emma Keller is Blackard Designs' new marketing and sales assistant. Emma was raised around dubious people who participated in dubious business practices. She even dated the son of a top man in the 'business'. But she wants to separate herself from that life. So she's come to Hera to start fresh with a new job and a new place. She's not thrilled to find she's attracted to her new office mate, who also happens to be her new boss' brother. She's even less thrilled to find her old life has followed her to Hera.

Maybe it's because I already knew Dylan but whatever the reason, I felt that character development was better in Freedom. And I also felt as though Ms. Wolfe did a better job at showing me rather than telling me. Freedom is told in alternating POV - Dylan and Emma - and that added a lot to the character development and the story. I felt as though I knew Dylan and Emma - how their pasts affected them and who they aspired to be in the now. I also enjoyed the action and tension brought with the developments surrounding Emma and her family. Those developments also introduced a few new characters, one of whom, Cooper, I'm hoping to see more of.

One thing I missed, having read Fearsome, was the way the town elders, Archie, Eleanor and Lois, were so involved in the lives of the youth. While they made a brief appearance, they weren't as big a presence in Freedom.

I liked how Dylan and Emma's love blossomed. It might have been a little fast but as Dylan's doctor told him,

"You realize there's no right way of falling in love."

And both he and Emma were rather cautious about their relationship. Dylan was especially concerned due to his past. But I liked how things between them developed.

Obviously, I liked Freedom. I'm glad I decided to continue in this series. Ms. Wolfe's writing showed growth. I liked that she gave me a better understanding of Dylan's illness, as it plays an integral role in the story. And the excitement added with Emma's baggage, made the story more entertaining. I look forward to more from Ms. Wolfe.

S.A. Wolfe lives with her very loud, opinionated children and husband. She is a voracious reader and is passionate about writing, and when those two activities don't keep her locked away in her room, she loves roaming the streets of New York City. Sometimes she even hikes mountains, but most of the time she finds excellent ways to procrastinate.