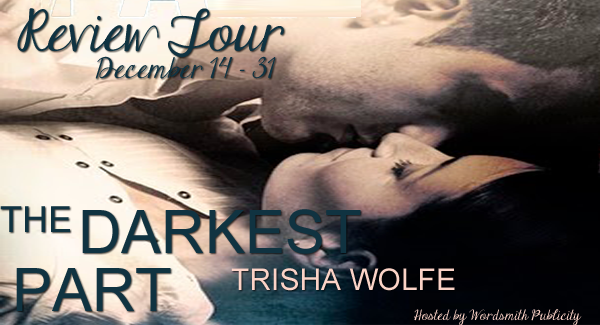 Welcome to my stop on the blog tour for Trisha Wolfe's The Darkest Part. Below you'll find all the details for the book, my review, and because I think this book is so fabulous, I'm giving away a copy! So don't forget to enter the giveaway. 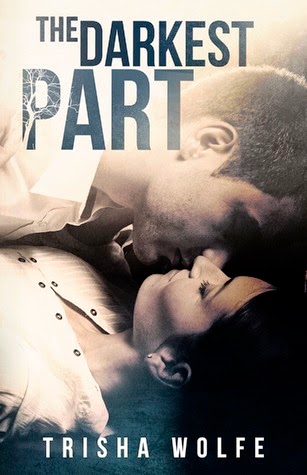 Synopsis
Pressing the boundaries of both the psyche and the heart, Sam and Holden embark on a dangerous journey that will test the limits of love.

Sam Wintry’s life used to be almost perfect. She was engaged to her childhood best friend and high school sweetheart, Tyler Marks, planning an amazing cross-country honeymoon during her college break. But after a hit-and-run leaves her in ruin, she begins seeing Tyler’s fractured, ghostly presence, and her family believes she’s losing her mind. Not until she completes their journey, stopping along the way to scatter Tyler's remains, will Tyler be able cross over. Only...is Sam ready for him to leave her?

When the black sheep of the Marks' family, Holden Marks, returns to check on Tyler's case, Sam convinces him to give her his brother's ashes. Despite their shaky history, she needs him...plus, he owes it to Sam and his brother. What she doesn’t count on is Holden’s relentlessness to go on the trip.

On the road, Holden realizes just how unhinged Sam has become. Dealing with her psychosis forces him to confront his dark past, making it harder to keep secrets hidden that should remain buried. Especially from Sam, the only woman he’s ever loved. And as Sam starts to unravel the truth, she begins to question if the brother she's unwillingly falling for again is in an even darker place than her.

Man! What a story! I agreed to participate in this blog tour because I'd already one-clicked the first 2 books in the series on Naomi's recommendation. (Nomi's Paranormal Palace) At 15% in, I messaged her to say I now understood what all her gushing was about. And it only got better from there.

The Darkest Part - Ms. Wolfe did a fantastic job of weaving in the actual definition of 'the darkest part', the heartwood of a tree,  and the imagery it evokes into Sam and Holden's story.


"It's the darkest part," I say, and a mock laugh tumbles from my mouth. "I can relate. It's dark, stubborn, callous, dead on the inside."..."That's only one perspective. The way I see it, the heartwood is strong, beautiful, and resilient. It can fight off any outside threat that tries to invade, and in rare cases...is alive. It may be the darkest part, but a living heartwood is a force to be reckoned with."  Sam & Holden, Loc 1713


Sam is struggling with her fiance's death. She and Tyler had been inseparable for most of their lives. She can't seem to figure out how she's going to live without him. She does devise a way to herself, and Tyler, the peace they need.

Holden, Tyler's older brother, has always been his protector. Even after Tyler's death, Holden is protecting him. They had so many secrets between them. And now he's joining Sam in her mission to let Tyler go - and he has to keep his cool and not expose any of those secrets.

Holden and Sam have history - something Sam has kept close to her chest. And their road trip together is dredging up feelings Sam thought long buried, and forcing Holden to deal with feelings that never went away. The way things unfolded, how feelings were exposed, how they were on a physical journey but also an emotional one - Ms. Wolfe really gave me the feels. Getting both sides of the story, Sam's and Holden's POVs, kept me riveted. What each of them had gone through and suffered - it was quite the emotional journey. But one they needed to travel.  I loved the honesty between them once all the walls were brought down. I could feel Holden's fear over what Sam's reaction to the Marks' brothers' secrets might be. And I could feel Sam's love and understanding towards Holden. I also understood Sam's need to keep Tyler with her and appreciated her struggle to let him go. Holden was right about her being strong and resilient, like heartwood.

The Darkest Part was incredible. Even though I'd put some of the puzzle pieces together, it didn't take anything away from the emotional impact of the story. I know Holden and Sam's story isn't over and I'm a little anxious about what life's going to throw their way. But I'm also eager to find out.

For more information on Trisha Wolfe and her works, please visit: www.trishawolfe.com.

To be the first to hear about new releases and sale events, sign up for Trisha Wolfe's Newsletter: http://bit.ly/1rXTKI7.