My pal Robyn Jones (@RobGirlBooks) and I enjoyed reading and reviewing Rock Chick so much, we decided we're gonna read 1 book from the series per month. We read Rock Chick Rescue for April. Yes, I know it's May but sometimes life gets in the way. Bonus for you?!? You'll get 2 Rock Chick reviews this month. We start Rock Chick Redemption tomorrow. :)

Okay, on with the review... 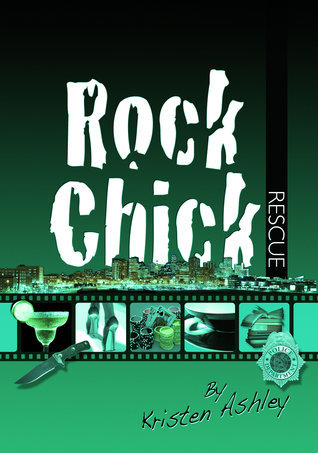 Synopsis
Jet McAlister has a secret. Eddie Chavez has the hots for Jet (not to mention Eddie's just plain hot). Jet has too many problems to realize that Eddie's interested. Eddie loses patience when Jet ends her waitressing shift at a strip club with a knife at her throat. Since Eddie's a cop, he figures he can help. Since Jet's used to solving everyone's problems she doesn't want Eddie's help.

Rock Chick Rescue takes you on a wild ride with Jet, Eddie and the gang as they wrestle bad guys in a bagel shop, hit Denver's backstreet poker tables (with big hair), and help the strippers at Smithie's take down a would-be murderer.

Through this, Jet's got to learn that even when life made you give up your dreams, you can still end up with the (hot) guy. Eddie's got to rescue Jet from a bad man (so he can do better things with her) and teach her that some dreams can come true.

******
Once I finished Rock Chick Rescue, my thought, once again, was this book was SO.MUCH.FUN! And once again, I was in need of a fun read. With a wonderful cast of characters - some colorful, some zany, and some HOT - lots and lots of action, smoking smexy times, and cool music, Rock Chick Rescue served up just what I needed.

Me: I have to say I identify more with Jet (than Indy) because of her insecurities and her responsibilities - taking care of all the people in her life. Not saying I'd jump a knife-wielding baddie though! ;)

Omigosh, I almost died when Jet said what she said to Eddie and he got the wrong idea...I was laughing hysterically! I'm liking watching him wear her down.

And what is with these girls running from HOT guys?!?

I love the silent teasing going on between Lee and Eddie...paybacks are hell, right??

I was really missing Indy and Tex so I was so glad when they got more involved in Jet's affairs. Especially Tex - god I love the guy! He's taken a shine to "Loopy Loo" but is it just because things had gotten boring?!?

I have to say I'm enjoying the meddling moms...my mom is NOT like this and I don't know that I'd enjoy it, but I like that Jet's and Eddie's moms are in the mix.

Okay, I'll try to chat more often...I'm sorry I've read so much before chatting but it just couldn't be helped. I am really enjoying this!


I loved Lee's teasing because things felt tense between them with Eddie's unrequited love for Indy. One of my favorite parts of the story is Eddie getting the chance to feel what he feels and not keep it secret.


I made some kind of mortified squeal when Jet said what she said to Eddie. And then I wanted her to fix it fast, but I liked how it was resolved because Mr. Smart Cop read her all wrong and jumped to conclusions and did he apologize for thinking the worst? No! He probably thought the gift of his attention was consolation enough. The man is not short on ego, which makes his vulnerability where Jet is concerned so awesome. What do you think of Kristen Ashley's brand of Alpha male? There's a lot of "you're mine to protect." Even more bossing around. Jet seems to like Eddie's way of communicating, you know shoving her against the SUV, against the wall, against whatever. I think I would be slapping his hands away and showing him my death glare. It's scary.

Oh, and what is up with these girls running away from hot guys?! I've only run away from one hot guy. He's a character in a story I'm working on because wow.

Ooh, me too! And I loved what Eddie said to Jet about his feelings for Indy and how they changed...*swoon* I also find it hilarious that he's having to spell out their relationship not only to everyone on the 'street' but also to her!! And his vulnerability where Jet's concerned makes him even more swoonworthy. That scene where she's on the motorcycle with Vance? And Eddie sees? I believe that was an 'oh shit' moment for me...right before I started laughing!

It's funny you asked about my feelings on Ashley's alphas...I was just thinking about it yesterday...probably while reading about Eddie pushing Jet up against his truck or a wall or... I LOVE it! I'm not sure I'd take too kindly to having it done to me but then again, maybe I would. At any rate, I think I like it for Jet because she's always taking care of everyone else. And I get that she's stubborn and independent and all, but deep down, I think Eddie's wanting to take care of HER (in every way) is the clincher for her. She won't admit it - may not even realize it yet, but yeah...

YAY for bar brawl!! I just KNEW Indy would have to get a bar brawl in! *ha* I laughed over all the tussling going on and Jet calmly takes her stun gun out of her purse.... I was having trouble containing my laughter last night so as not to wake up James!

And THEN we get the sister brawl! With Lee's boys watching no less...can't you just imagine it?!? They were probably wishing for mud...or jello or something.

And how scary is Vince Fratelli? He kinda makes my skin crawl. I'm going to enjoy him getting his!

Oh man, the scene with Vance on the bike! I think that was one of my favorites. Jet is an amazing character. I'm not sure we've hit the Rock Chick I most relate to yet. Jet is so sweet and kind. Indy is way out of control. I love the bar fights, every single one of them!! And the sister brawl on the floor rocked. They behaved so terribly. Nice, sweet Jet got in a hands-on fight with her baby sister in front of hot, drooling men. I loved it! Oh, the whole smitten Tex bit, AWESOME!

You're so spot on about the alphas and Eddie being just the right kind for Jet. One of the best things about the Rock Chick series for me has to be the girl power/integrity. It's so pro-female from the moms to the strippers. Since the books take place in your backyard practically, does that bring the story to life in a more real way, like you expect to see crazy Indy and her odd assortment of weirdos and Alphas traipsing around Denver?

So far, Jet is definitely the Rock Chick I identify with the most. I would love to live life with the gusto Indy does, but I'm just not that. I CANNOT choose a favorite Rock Chick Alpha though...don't ask me to. Please! :) YES - I love the girl power in Rock Chick! They do sometimes get themselves into situations that their men help get them out of, but I have no doubt they could do it themselves...eventually. ;) I love, love the fact that the books are set here. It does make for a more visceral experience, knowing the places being described. And I'm pretty sure I've seen Duke and Dixie down at the Little Bear! ;) Maybe I'll have to cruise Indy's neighborhood and see who I can see. *ha*

Vince Fratelli definitely gave me the creeps. I was not sad at all with the punishment he got.

Daisy is the former stripper! And she's awesome!! I love her momma-bear tendencies and that she wants to take care of her 'girls'. And how she cuts off Marcus' 'water' to get what she wants. *ha*

And can you believe Mace?? Can't wait for his story. And Hank! What was up with that?!? Yep, I'm definitely anxious to read Rock Chick Redemption!

Final thoughts: again, although I'd like to be Indy, I definitely see more of myself in Jet - with the exception of having attention from hot guys, of course! ;) I enjoyed so much watching Jet blossom into the girl she's meant to be...with a little help from everyone. And Eddie...it was kinda funny that he got to be open with his feelings about Jet and things just didn't go according to plan. But he's stubborn enough to stick it out. Honestly, I know we've gotten better acquainted with Lee and Eddie, but I really can't choose between ANY of these guys! So although I get Jet best, so far, I haven't met a Rock Alpha I'd turn down! *ha*

So you're a Jet girl who can't pick her favorite Alpha. Funny! (I'm whispering "book slut" right now) I'm holding out like always. I like Eddie (too pushy for me) and Lee is so dreamy, but hello, there's an entire agency and cop force waiting for us! I'm already in love with Mace. I don't even care if he thinks he's in love with Jet. Eddie has already had a "talk" with him. I want to ride on his motorcycle. I noticed that when I went to Colorado, there's this whole motorcycle vibe going on. We have bikes here, but mostly they're the sporty zoom zoom pretty kinds and we have a helmet law here. Colorado has this free country riding feel to it. So you guys get all the damn alphas. We get the coffee guys with shoulder bags. Hmm. Next time I'm in town we have to check out some of the places in the book. I've never done that, not even here where so many stories take place!

I'm so happy we're good enough friends that you can call me a book slut! *ha* However, I simply meant that I don't know if I've found the ONE for me yet. I need to finish sampling all those HOT ALPHAS! And really, Eddie is too pushy for you?? Do you not remember Lee and the handcuffs?? Oh, you're into that sort of thing...is that it?!? Mace...he makes me tingle. *ha* I want to ride his, um, motocycle too. ;) Yes, Colorado definitely has a motorcycle vibe...lots and lots of them here. We will totally have to go to some of these places when you're here next year. We should sooo check out The Little Bear...you just might find your alpha there. ;)