Essence of Time, the award-winning fourth book in Liz Crowe's Stewart Realty series, has been re-released with a beautiful new cover AND lots of new scenes!

A “take life by the throat” philosophy has always served Rob well. It keeps him focused, forcing emotions and potential relationships to take a back seat to his aspirations. But once every
obstacle has been conquered and he’s achieved his goal—executive chef at a famous Chicago restaurant—he must acknowledge that he has reached his mid-thirties very much alone.

Blake has just jettisoned his dream job—head of a fast-growing craft microbrewery—to escape from the woman who shattered his soul. Arriving at a Chicago beer festival prepared to drown his sorrows before moving on he is miserable and numb.

Fate throws the men together altering their respective worlds forever.

Once Rob reveals the personal demon that has haunted him for years, Blake allows himself to fully trust again, and admits he wants a child. But a mutual attraction evolves out of a business arrangement with the woman hired as their surrogate, which has the potential to destroy an already delicate status quo.

But time is of the essence, and becomes the one luxury they don't have.

An honest depiction of a modern relationship mosaic reminding us to treasure every single moment we are allowed to love and be loved.

Essence of Time is currently only 99 cents!
It can be read standalone.

Rob interrupted him, keeping his distance, his voice low and calm. “I don’t want to do anything that will make you unhappy. It’s all I do anymore it seems. I know, I know, me being sick doesn’t make you unhappy it makes you mad. Whatever. Listen,” Rob said, taking the few steps between them and pulling Blake to his feet. “You look like you’re about to walk in front of a firing squad. Fuck it. Let’s call it off.”

“No.” Blake let himself be held a moment, listened to the sound of his lover’s beating heart, his arms wrapped around the man’s too-thin waist. “It’s okay. She’s…I mean, I think it will be fine.”

Rob tilted his chin up. Blake studied Rob’s face, stared into his brown eyes, memorized it, for later. They both smiled. Blake pressed a quick kiss to Rob’s lips, then began to disentangle himself. They needed to get on with it. Lila would be sitting and waiting by now. It would be rude to…But Rob held onto him, his grip strong. The lips he pressed to Blake’s, parting them with his tongue were firm and had a familiar urgency.

Blake broke the kiss first, held onto Rob’s face. “Keep that up and the poor girl will have to pay her own expensive dinner bill. Come on, let’s go. I’m tired of waiting on you.” He brushed a hand across Rob’s chest, and lower, grinning. “Save this. I’ll take some later.”

The ride downtown shimmered with anxious energy. Rob hummed, a clear sign of his nervousness. Blake tapped his fingers on the armrest, fiddled with the window, the HVAC, the radio.

“God damn it.” Rob smacked his hand away from the controls. “Cut it out. You aren’t making either of us feel any better.”

Blake blew out a long breath. “It’s not like I know how to act here. I mean, what the hell are we supposed talk about? The bank transfer of the money? The process? Who gets her first? If she wants it in both…”

“Stop it.” Rob’s voice was strained, his jaw clenched. “I don’t know either but I damn sure am not gonna ask her if she wants a DP. At least not on the first date.”

Blake laughed so loud he snorted. Rob shot him a sideways look as he pulled the F-150 into a parking spot behind the restaurant and put it into park. They both sat, frozen with indecision and anxiety.

“Do you remember Paris?” Blake put a hand on Rob’s thigh. The other man’s muscles twitched under his palm. “That girl, from the nightclub? Our first vacation?”

“Yeah.” Rob kept his hands on the steering wheel, eyes trained straight ahead. “What about it?”

Blake sighed. Rob’s body language, his clenched teeth and white knuckled grip only ramped up his own stress. But he needed them to get past this. They had to go into the restaurant, meet with Lila, eat, drink some wine then…possibly…go home and…He shook his head. He ran fingers through Rob’s hair, the silkiness of the new growth brought a smile to his face. “That was pretty easy. I mean, you know, my first time as three.”

Rob turned to him, anguish suffusing every pore of his handsome face and filling his eyes. He gripped Blake’s hand, yanked him across the console and kissed him hard. When he broke away, Blake touched his face. “You’re the expert here. Not me. The ladies love your tall, blond, Germanic hotness. I’m along for the ride. I’ll…watch and learn.”

“Don’t be an idiot.” Rob leaned his head back, hand over his eyes. “Jesus, this is…about as fucked up as it gets.”

“No, it’s not. Even if you weren’t sick we would be doing it. You know that. We wanted a baby.”

“You wanted a baby. I’m perfectly fine without…”

“You told me a thousand times you weren’t doing this to humor me. Were you lying then, or are you lying now?” Blake’s ears got hot and his chest tightened but he clamped down on the anger. “All we have to do is figure out how to share. That is one thing we know we both need to….practice. I don’t want her to think we’re a couple of barely evolved Neanderthals.”

Rob turned to him, his eyes still bright with unshed tears. “Even though we sort of are?”

Blake shrugged, unable to resist a smile. Rob sighed and climbed out, meeting Blake at the back bumper. He grabbed his arm. “I love you Blake Thornton. God knows I do. So, let’s get on with this, shall we? Not quite the impromptu heat of a Paris nightclub but…we’ll make do with the Chop House.”

The men walked around the corner and up to the restaurant in silence each deep in the mire of his own misery. They spotted her, seated at a table in the front window, before she saw them. Blake took a breath and leaned into his lover’s ear. “Don’t stand there and tell me that she is not beautiful. That she doesn’t do anything for you.”

He put a hand on Rob’s back, as they walked towards her. She looked up and smiled. Blake felt Rob shiver under his palm. “The mother of our child, Rob. The child we both want,” he whispered, then stepped aside so Rob could give Lila a quick hug before he did the same. 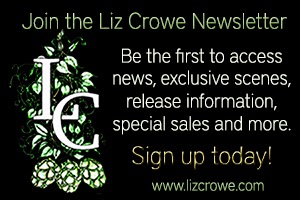 Amazon best-selling author, beer blogger and beer marketing expert, mom of three, and soccer fan, Liz lives in the great Midwest, in a major college town. She has decades of experience in sales and fund raising, plus an eight-year stint as a three-continent, ex-pat trailing spouse. While working as a successful Realtor, Liz made the leap into writing novels about the same time she agreed to take on marketing and sales for the Wolverine State Brewing Company.

Most days find her sweating inventory and sales figures for the brewery, unless she’s writing, editing or sweating promotional efforts for her latest publications.

Her early forays into the publishing world led to a groundbreaking fiction subgenre, “Romance for Real Life,” which has gained thousands of fans and followers interested less in the “HEA” and more in the “WHA” (“What Happens After?”). More recently she is garnering even more fans across genres with her latest novels, which are more character-driven fiction, while remaining very much “real life.”

With stories set in the not-so-common worlds of breweries, on the soccer pitch, in successful real estate offices and many times in exotic locales like Istanbul, Turkey, her books are unique and told with a fresh voice. The Liz Crowe backlist has something for any reader seeking complex storylines with humor and complete casts of characters that will delight, frustrate, and linger in the imagination long after the book is finished.

If you are in the Ann Arbor area, be sure and stop into the Wolverine State Brewing Co. Tap Room—but don’t ask her for anything “like” a Bud Light, or risk serious injury.