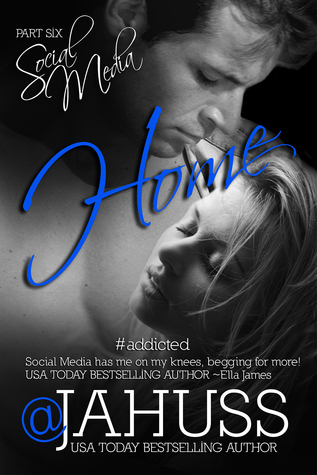 
I just want my Grace back.

I just want to move on.

I want to plan the future and think about kids and preschools and college funds. I want everything she ever wanted, and I want us to make it happen together.

But the media needs more from us. More dirt. More pain. More payment for past transgressions.

You can't change the past. And even though Grace is ready to put her demons to bed, mine are just starting to get restless. Because when you've silenced as many enemies as I have over the years, you know that secret won't stay buried forever.

Home is the perfect ending for Grace and Vaughn. There were a few bumps along the way but where they landed gave me warm fuzzies.

I said at the beginning of this series that one of the things I liked most about Grace was her strength - her feistiness. Over the course of the series, she lost some of that zeal she'd seemed to have. Home could also have been titled "Grace's Return" and again, it wasn't a simple or easy path, but she found herself again.

Vaughn was *almost* perfection. He made a few decisions, in an effort to protect Grace, that I wished he'd discussed with her instead. But that made him more real. Other than that, I loved him. We did see a little of the dominant Vaughn return, but he was desperately needed.

Ms. Huss had said at some point that this series was about how social media, or media in general, had impacted both Grace's and Vaughn's lives. I got how it shaped Vaughn's - he's a movie star, after all. But it took me longer to see how it had affected Grace, both positively - with the freedom she felt hiding behind her twitter handle, and negatively - concerning the tragedies she suffered as a teen and adult. But in Home, the evils of media are made very clear. It's shocking, dismaying, and disgusting to think about how some in the media prey on others' lives.

The way that Huss incorporated social media lingo into the titles and what was happening in the story is brilliant. That she could wrap so much story, so much emotion, so much suspense into each episode - well, that's just Huss' talent, in my opinion.

Okay, y'all. They're all out now (or will be tomorrow). No more excuses. Read this series and see what the fuss over Huss is all about. :)